A Story of a people that had great hardship and yet had reason to be thankful. 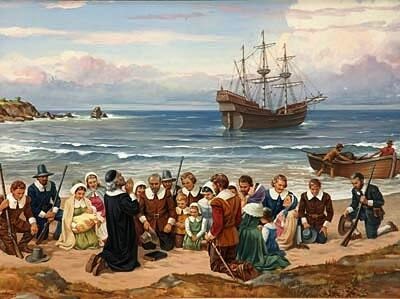 The Pilgrims arrived in the new world in 1620 to form a new government free from the religious tyranny of England and the Catholic Church. Their motivation was the free exercise of Religion.

They arrived at Plymouth Rock on Cape Cod area of Massachusetts on December 11, 1620, in the cold of the winter. About half of the 102 Pilgrims died during the first winter, especially the women.

After arriving and March of 1621 only 47 of the 102 Pilgrims had survived. Most dying of the disease that they contracted while still on the ship. During the peak of the sickness, only 6 or 7 of the colonists were able to feed and care for the rest of the group.

Construction of homes began immediately. The first home was completed on January 9, 1621. Families had  to double up and build a shared home to avoid building more than they needed that winter. The settlement was mostly completer by early February.

With the help of the local Indians, the Pilgrims learned to fish and Hunt and later that year to farm the land.

With the providence and help of God, the Pilgrims were able to survive the first year in their new home. At the time of the first harvest, they could be sure that they had enough to last the second winter. They wanted to acknowledge God for their survival and abundant supplies so they had a feast of Thanksgiving which we now observe as Thanksgiving Day.

The First Thanksgiving Was A Celebration Of Abundance
As Much As It Was A Relief From Loss. 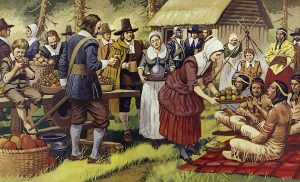 With all the hardship what did they have to be thankful about?

The first Thanksgiving was celebrated the following year in November of 1620, (the exact day is not known) going from starvation to an abundant harvest. They gave thanks to God and with the help of the local Indians who helped them learn how to live in the new land.

This Year 2020 marks the 400th anniversary of the Pilgrims’ Mayflower voyage and the founding of Plymouth Colony.

The exciting Pilgrim story reveals how God worked through a relatively small but dedicated group of believers to gain freedom of religion.  The world owes a debt of gratitude to these impressive men and women who sacrificed their all for the freedom to worship God.

The first winter killed off nearly half of these noble people of God.  Indian scares made the living conditions at times seem nightmarish.  Yet, they were not here for their comfort.  These were pilgrims.  They sought a place to worship God according to their own conscience.  Their sacrifices paved the way for the establishment of the greatest country in the world.

Next: What is Thanksgiving?